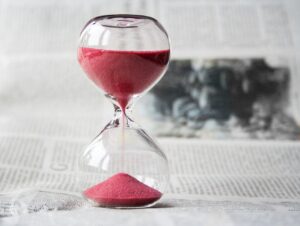 Do you remember Mom telling you that? That was right after “Never talk to strangers” and right before “If you keep making that face it will get stuck that way.” I don’t know about the other two, but let’s talk about that first one, especially when it comes to networking events and meetings.

Showing up early has an amazing number of benefits. Let’s look at nine of them over the next several posts.

Reason #1: If you show up early, you own the room. The cliques haven’t formed yet. Anyone arriving after you (at least at first) will have to approach you. That gives you a little bit more power and control of the networking environment. And that will serve to make you more relaxed and better able to connect with those around you.

This can be particularly important to those who haven’t gotten over the whole “Stranger Danger” mindset. As I’ve told my clients in the past, instead of being a small child afraid of strangers, why not be an adult and pretend you are hosting the event? It’s a lot easier to be the host if you get there before anyone else.

That extra ten to fifteen minutes you get from showing up early gives you a much better chance of reaching your networking goals. The more goals you reach, the better long-term results you will see.

Reason #3: Free yourself of the stuff. As with most of these benefits, this is all about you feeling relaxed and at ease. When you first show up at a business gathering, you really aren’t prepared to network. You might have your purse or briefcase, maybe a coat or an umbrella. Business people always seem to carry a lot of stuff with them. If you walk into the event just on time, then you still have to get rid of all of that stuff just to have a hand free to reach out to the other attendees.

Getting there early allows you the opportunity to drop off all your stuff, maybe check your coat (or at least drape it over the back of your chair), and check to make sure all of your materials in place. Basically, you can get rid of everything except those tools you need to succeed in your networking.

Can you still network if you “only” show up on time (or, shudder, late)? Sure you can. But why put more burdens on yourself that you already have? Life is difficult enough sometimes without adding in challenges that are easy enough to avoid.