Networking with the Rich and Famous 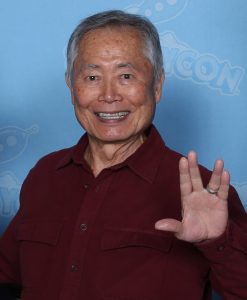 As I’ve mentioned, each year at Labor Day, I head down to Atlanta for DragonCon, the annual science fiction convention. One of the cool things that can happen there is that you might just run into someone famous “in the wild”. One morning, I was up getting breakfast in the hotel lounge. Standing next to me in the breakfast buffet line was none other than George Takei, probably most famous for his portrayal of Mr. Sulu on the original Star Trek series.

Now, I could have gotten all tongue-tied and gone into “fan boy” mode. Instead, I just asked how the convention was treating him. We chatted briefly and he told me he was a little worried that the weather (a hurricane had blown up in the Gulf of Mexico) might delay his return to Los Angeles.

It was almost like he was an actual human being!

Here’s how this applies to networking. You may find yourself at a networking event chatting with someone who turns out to be a CEO or President or politician. Many people have a problem with this because of a perceived difference in social status. They worry that they have nothing to bring to the conversation.

Here are a few tricks to get past “fan boy” mode in your business conversations:

Don’t let some perceived difference in social status separate you from the opportunities around you. Put away the “I’m not worthy” attitude and say hello to another human being. If nothing else, it might be a fun conversation.

What famous person would you be in danger of going “fan boy/girl” around?