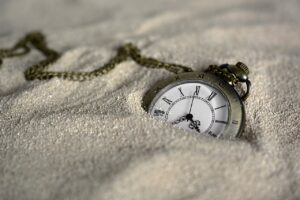 “It gets late early out there.” ~ Yogi Berra

Showing up early is one of the easiest and most powerful techniques for success when attending networking events. Last time we talked about three of the nine reasons to show up early: Own the room, double your networking time, and free your hands to be ready to network. Today let’s take a look at the next three reasons.

First, you have time to scope out the location. Find the buffet line, the dessert table, the beverage stand (especially the coffee!). Look for the coat room if one is available and by all means locate the restrooms. Knowing where all of the facilities are will not only make you more comfortable, but others will see you as an authority and you just might end up being their hero.

In addition to the facilities, you should also find the “good spots” in the room. For example, if the room is full of round tables and you know that at some point you will be standing and introducing yourself, sitting at a table in the center of the room probably won’t be as productive as sitting toward the edge. An  edge seat means when you stand up to address the room, the other attendees are all in front of you.

Meet the organizer. OK, so you’re there and you have the lay of the land. You are ready to network. Here’s where reason number five for being early comes in. Who can you connect with who will be there before anyone else? Think about it for a second. Before the first attendee, before the sponsors, even before the speaker, the first person there will be the organizer. These are the folks who are actually throwing the party. You may even have spoken with them when you called to find out more information about the event. Do you think they might be well-connected? You bet! Do you think it would be a good idea to get to know them? Again, yes!
Here’s the trick. These folks are usually a bit busy and possibly more than a little stressed with all the preparations. Stopping them for a friendly chat at this point isn’t likely to endear you to them. No, the best way to connect with an organizer shortly before the event is four little words. “How. Can. I. Help?”

At this point, one of two things will happen. One, they will say “no thank you”, or, two, they will take you up on it.

If they turn you down, don’t push. You will get credit for the offer. You will stand out as someone willing to make an effort for the group and when you next approach the organizer, during a more calm portion of the gathering, he or she will remember you and be more willing to connect and help you.

If they take you up on the offer, even better. Most likely it will be a relatively low-effort task, such as handing out flyers. For the expenditure of very little time and energy they now see you as someone who has actually worked to support the group — making you much more worthy of their assistance in the long run.

I do want to repeat, though, just make the offer and, if they say “no”, move on. Many organizers already have a plan and you diving in to help without being asked may end up making the organizer irritated

Finally, meet the other early people. The organizers are only one category of people who show up early so benefit number six would be to meet the other folks who tend to be there before the event officially starts. You can connect with the speaker (if there is one). Depending on the person, they may also be quite well-connected. Be aware that some speakers don’t like to be disturbed before they go on, so do be respectful of their process.
Master networkers also tend to show up early (for all the reasons we’ve been talking about). Not only are they good to know for their networks, but they are also quite comfortable making conversation, so if you aren’t at ease making small talk, they can make it much easier to slip into that mode.

One other group to be aware of is the newbies. These are the folks who show up early because they’re afraid they might be late. Remember, just because someone is new to the group doesn’t mean they aren’t worth knowing. That poor lost soul standing off to the side, waiting for someone to come talk with him might actually be the CEO of his company. Be his hero and rescue him. You’ll never know where it might lead unless you make the effort.

While it may “get late early”, there’s no reason I can think of to be late. Tune in next time when we talk about the final three reasons, including the most important one of all.