The Dangers of Culture 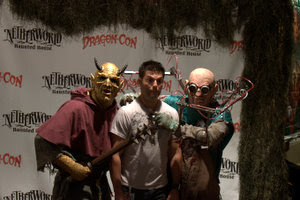 Dragon*Con was a great experience as a vacation, but also as an example of how the concepts of good networking can play out in the real world (or at least as real as an event which involves people dressing up in costume can be). One aspect of networking which I got to observe in particular was the world of subcultures and how members of one perceive the members of another.

Dragon*Con has a variety of “tracks”. They represent various subcultures within the overarching culture of science fiction fans. There were tracks for fans of Star Wars, Star Trek, and StarGate. There were those which supported the fans of science, space, and skeptics. They had tracks focused on costuming, writing, and even film-making (plus around a dozen others).

The danger with these subgroups is that, unintentionally or not, they can be unwelcoming to outsiders. If you don’t know the in-jokes or the cultural rules, then you can find it difficult at best to attend the events associated with that subgroup. Worse, sometimes these groups can foster a culture of superiority over the others. As a result, some tracks are viewed with a certain level of disdain — creating a much higher perceived barrier to entry for any potential newcomers.

This behavior isn’t limited to the world of spaceships and laser blasters. It crops up in the world of networking, too. I’ve seen members of one networking group view other groups as being “second-rate imitators” without having actually attended a single meeting. I’ve seen otherwise good networkers hold low opinions of whole industries and thereby miss out on some of the strongest connections they might be able to make.

Of course, the solution just comes down to keeping an open mind. View each person you meet as a person, separate from their subculture. If they invite you to an event in their group, accept with an attitude of curiosity and a willingness to learn. After all, if this other person has dedicated themselves to that group, then maybe, just maybe, there’s something there for you.

Even if the group doesn’t turn out to be a culture that fits in with your style or needs, you will at the very least be better informed and better able to recommend the group to someone else for whom it might be a better fit. You’ll also be able to warn them of any potential landmines presented by the group culture.

Like discussing who was a better starship captain: Kirk or Picard.