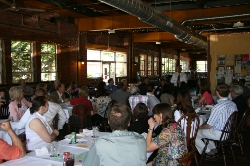 As I mentioned in yesterday’s post, I attended the Ann Arbor-Ypsilanti Regional Chamber’s “Networks!” event on Thursday. Thought I would do a quick review.

Organization: Ann Arbor-Ypsilanti Regional Chamber (aka A2Y Chamber)
Location: Various hotels, banquet halls, restaurants, golf courses, and country clubs around the Ann Arbor/Ypsilanti area.
Date: Usually the second Thursday of the month, skipping August
Time: 11:30am-1pm
Format: Open networking, meal, introductions, power-mingle, speaker
Size: 50-90
Attendees: Usually small business owners/sole proprietors, individual sales representatives/brokers
Cost: $25 for Chamber members, $45 for prospective Chamber members
The Chamber of Commerce Lunch is the archetype of the networking event and is largely the image people have when they are talking about such gatherings. The Ann Arbor-Ypsilanti Regional Chamber (A2Y Chamber) wouldn’t be doing their job if they didn’t have their own version of this venerable institution. The nice thing is, they throw in a twist or two, just to keep things fun.
In general, starting at 11:30 or a little before, they have mixer-style open networking. Nothing particularly unusual here. As with most networking events, you’ll have your mixture of effective and ineffective networkers. Not long after that, the lunch buffet will open. Networking continues at the tables until around noon.
Most of the time, this is when each person gets their moment in the sun.

Each person in turn gets to stand and introduce themselves. These are very limited introductions. With between fifty and ninety attendees, they can’t allow everyone to talk for five minutes. (As an aside, if you want to do that, talk to the Chamber about sponsoring the event.) Each participant stands and is allowed to say their name, their company name, and ten additional words about what they do or who they are seeking. I would recommend that anyone planning on attending should spend some time before showing up to figure out exactly what they want to say.

By the way, never try to just “wing it” on this. People who do, inevitably just start talking and then get nervous and talk some more and then realize they’ve talked too much and feel bad and then apologize to everyone, but as long as they are apologizing they had one more thought that they just needed to say and then they have to apologize again for going on so long, etc, etc, etc. This is your chance to look poised and confident. A little bit of practice will go a long way toward giving everyone the right impression.
After the introductions, the host, almost always Tom Denk of Thomas Denk Financial Services, starts the “Power Mingle” portion of the lunch. This is essentially more open networking, but since we’ve just heard who all the attendees are and what they do, we can focus our attentions on those with whom we might have something in common. Depending on how long the introductions took, the Power Mingle can last between ten and fifteen minutes.
After everyone takes their seat again, they move on to the formal presentation. The most recent speaker was Steve Sarns of NuStep, Inc, talking about NuStep’s “Home Grown Stories”. In the past they’ve had other local business people talking about their experiences, local celebrities, such as the University of Michigan Athletic Director, Bill Martin, speaking about topics near and dear to their hearts, and business coaches and instructors, such as Joe Marr of Sandler Training, Ann Arbor, who give mini-workshops to provide the attendees with some new tools to improve and increase their businesses.

Every once in a while, the folks who run Networks switch things up. We’ve had a couple of speed networkings. They’ve tried having designated “assistant hosts” read the introductions. They’ve even had a game show instead of a speaker on occasion. If you do plan to attend, you have to be ready for just about anything.

One helpful hint I have for attending Networks is in your seat selection. I recommend that you find a seat on the edge of the room, facing the podium. If you end up in one of the center tables, when it’s your turn to introduce yourself, you will always have half the audience behind you.

If your target market is small businesses/sole proprietors or the people they serve, Networks is a great venue for networking. Show up early, be prepared to tell everyone who you are and then get ready to begin making good connections.