Giving Them a Big Hug 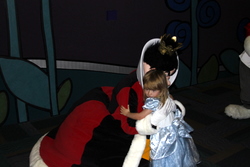 More networking lessons from my daughter at Disney World.

If you looked through my photos from our trip to Disney World, you might notice a theme or a pattern, if you will. It usually involves my daughter running up to some sort of fictional character — cartoon, princess, or other — and giving them a big hug before posing for the camera. Now the posing part is secondary to my point here. It’s the hugging part that I want to talk about.

After the King Louie incident on our first day, Kaylie decided that every character deserved the same level of attention. She would literally run into their arms with such an expression of joy and adulation on her face that the folks who were playing those parts were quite touched. At one point we happened to bump into the Queen of Hearts from Alice in Wonderland in a back hallway heading offstage. She and the March Hare stopped to greet Kaylie. Kaylie was dressed in her Cinderella costume and she and the Queen spent a few minutes curtsying to each other (after the requisite hugging, of course). After the interlude had ended and the Queen had retired to the backstage area, her handler came back out to tell us that the Queen had really loved seeing Kaylie and that she had really made her night.

I’d have to imagine that this is pretty rare with these folks who see lines of children of all ages all day long.

So many people view networking as a task to be accomplished — and the sooner the better. Here’s the thing, though: If we actually take the time to enjoy it and treat those we meet as true friends whom we are overjoyed to see again, networking would be, first, a heck of a lot more fun to do. Next, it would also tend to be a lot more productive. Treating other people as valued members of your life endears them to you and makes them a lot more likely to be looking out for your interests — especially since you will also be looking out for theirs.

Take a page from my daughter’s book. Dig deep and imagine what you would have felt as a child meeting one of your idols for the first time. Now take that emotion and apply it to the connections you make through networking. You’ll be amazed at how much further it takes you.