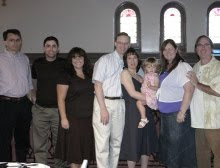 We were out tonight celebrating with friends. One of the group had his birthday recently and our tradition is to treat the birthday boy or girl (and their spouse) to dinner. It occurred to me that we have known most of these people for anywhere from five to fifteen years. We’ve seen each other through birthdays and marriages, through births and deaths, through a little bit of sorrow and a lot of laughter. I can say that without exception I would trust any of them with my life.

If we had that same relationship in business, these would be the same people who would not only vouch for me by passing along a referral, they might very well do the selling for me and just give me a signed contract. To tell you the truth, I’ve been blessed with those kind of business relationships, too.

The thing is, none of these connections happened in a day. My friends, now, at one point were mere acquaintances. When I first met them, for me to ask them for a bed for the night because we’d lost power at home would have seemed a little odd, possibly a little creepy. By the same token, if I had walked up to my strongest business connections when I first met them at the Chamber breakfast event and asked them for business, they probably would have backed away very slowly, keeping an eye on me at all times (or taken my card and promised to call me as soon as they had something for me — pretty much the same thing).

Every relationship you have has a certain depth or closeness, depending on the time you’ve known each other, the experiences you’ve shared, and the value you’ve provided each other. You may ask of that relationship only those things which are appropriate for that level of closeness. A new acquaintance might be willing to let you borrow his pen, but he’s likely to be a bit more reticent to hand over the keys to his car. Be sure that you never exceed the natural level of a relationship or you risk tainting what might have been a much more long-term (and profitable) opportunity.