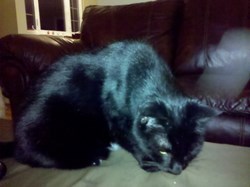 As I wrote, a few weeks ago we had to say goodbye to our cat Ray. It was sad for us, but it’s been even harder on his brother Luke. They weren’t completely inseparable, but they were very close and Luke is feeling the absence. This has made him a little needy. It doesn’t help that we are also having some work done on the house, so thing are just not right in his domain.

And he certainly lets us know it.

If he starts feeling neglected he’ll meow for attention. If that doesn’t work, he’ll start putting his front paws on my lap. Eventually, he jumps up on us so we can pay proper attention to him and his needs. If we continue to neglect him after that, well, let’s just say that things go downhill rapidly after that and no one ends up happy.

Too bad our networking connections don’t behave the same way (at least up to but not including the destruction of furniture).

If you neglect your connections, unlike Luke, they are not going to go to increasing lengths to get your attention. In fact, most folks aren’t going to make much of an effort to maintain a relationship anyway. If you ignore it, so will they. Without really trying (which is the point here) your network will evaporate from neglect. And guess whose fault that is?

OK, technically it’s both of you, but since they aren’t going to do anything about it, the responsibility is all on you. This is why a tool like a tickler file comes in handy. It helps you give your network the attention it needs to thrive and develop.

Fortunately for us, networks require considerably less attention than my cat. Most of your connections won’t need to have their ears scratched on an hourly basis. In fact, once you’ve put in the groundwork, a light touch once a month or so will probably be sufficient to maintain most relationships.

It’s a good thing, too. You have no idea how much a case of catnip mice costs!