Rev the Engines and Draw Some Attention 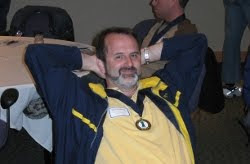 This morning I met with my good friend Doug Hockstad of the University of Michigan’s Tech Transfer Office. Doug and I have known each other for a while now. We are both alumni of the Leadership Ann Arbor program (class of ’07 rocks!) and he and I are now in a Mastermind group together. The last time we spoke he was eagerly anticipating a motorcycle road trip/vacation with a friend of his and this morning I got to hear about some of the details.

One of the things that struck me about his story was when he was telling me about all of the people he talked with along the way. For some reason the motorcycle acted as a magnet for everyone who was riding, had ridden or wanted to ride a bike of their own. He told me about one septuagenarian who was admiring the ride and lamenting that he had had to give up his own bike several years earlier.

Now, Doug wasn’t in the middle of a networking event, but what happened to him was a great example of what I call “wearing your flair” — having or wearing some visible example of your interests. The whole idea is to draw people to you, to give them something to start talking about other than the weather, to make you more than just your business — essentially to make you a person that other people will find interesting and worth knowing.

So, while I wouldn’t recommend riding your motorcycle into the next Chamber networking lunch, I would recommend finding some appropriate way to show off what’s currently important to you. The conversations it engenders will feel a lot more like making friends and probably end up being more fun and profitable in the long run.