You Can Do What? 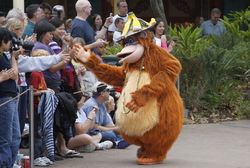 The last letter in my INFER acronym stands for “Resources”. Unfortunately, it’s one that seems to be difficult to explain. Essentially, this represents all of those things about another person — skills, personality traits, possessions — which don’t necessarily relate to their passions in life or their job.

It’s kind of the “other stuff”.

Now, why would this other stuff be important in networking? Well, you just never know.

I saw a great example of this when we were down at Disney World recently. We were waiting to see the parade in the Animal Kingdom, limed up along the parade route. The cast members (people who work for Disney) were walking back and forth chatting up members of the crowd. One of the cast members discovered that a group of guys who were standing near us were French Canadian. These guys were having a great time and were obviously a playful group.

After chatting with them for a few minutes, the cast member moved on to another section of the crowd, only to return a few minutes later with a young lady in tow. It turns out that it was birthday that day. The cast member prevailed upon the French Canadian group to sing “Happy Birthday” to her in French — which they were only too delighted to do.

After that several more people received the “French Birthday” treatment — and all of them were quite pleased with the unusual attention. Now, the cool thing about this was that, for these guys, the ability to sing “Happy Birthday” in French was wholly unremarkable. To the cast member, though, that ability was an opportunity to make a lot of people feel special, including the guys doing the singing.

As you chat with members of your network, be sure to keep your ears and mind open to the possibilities that even your connection’s most innocuous skill might provide. That knowledge might just help you make someone’s day.