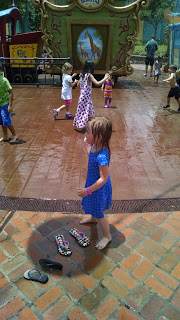 We whooped and hollered through the curves, screamed as we hurtled down the hills, and when we finally arrived back at the loading zone of Goofy’s Barnstormer Ride at the Magic Kingdom, we all had huge grins on our faces.

Except for my four-year-old, Abby.

Please understand, I did not force her to ride on this ride. In fact, I suggested that maybe she would prefer to go on something else, but Big Sister was riding on it, so Abby was, too. As soon as we came to a stop, she looked up at me, not scared, but not happy either. With a wrinkled brow, as if she were trying to understand the secrets of the universe, she asked:

A lot of would-be networkers fall into this same trap. We start attending a group or a regular event. We have fun meeting new people and maybe even get some real benefit from the program. At the end of the day, though, we aren’t getting the networking results that we’ve heard others have been able to achieve. Eventually we start to ask ourselves:

What we need to remember is the group or the event are just a means to initiate connections. It gives us the opportunity to meet new people and potentially expand our network. They cannot, however, be the venue where we build the network from start to finish. That comes later, when we spend time and effort to build those connections, the same way we would any other successful relationship.

Abby may not have been sure of the reasons we were on that roller coaster, but if we want to be successful networkers, we’d better be certain why we’re attending the event. Otherwise it was a nice lunch with strangers with nothing to show for the long term.

Who are you hoping to meet at your next networking opportunity?