Social Media as a Crutch 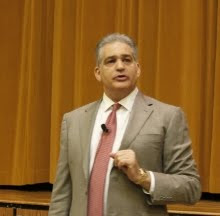 Lisa and I attended Bob Burg‘s “Endless Referrals” presentation in Southfield on Wednesday morning. As usual, Bob put on an amusing and educational show. He has a polished repertoire and rarely did his commentary fall short of expectations.

I thought one of the points he made was particularly important. He was talking about social media — Twitter, Facebook, LinkedIn, etc. He said that he thought they were important tools for networking, just like email and handwritten notes. They were no replacement, however, for actual honest-to-goodness, face-to-face interactions.

The challenge with social media, as I see it, is for a lot of people, they pursue their social media contacts to the exclusion of any other kind of connection. They kid themselves into thinking that by tweeting or posting their status regularly, they are maintaining good networking connections and the skills necessary to nurture them. Unfortunately, the first time they have to step away from the monitor and keyboard, they discover that the skills don’t translate into the face-to-face world.

In the social media world, you succeed by talking about yourself and what you know. When you are face-to-face, asking about the other person and taking a sincere interest in them are the skills needed. On Facebook, you can carefully craft each message until it is perfect. At the Chamber lunch, active conversation means you have to be fast on your feet and brief but clear in your communication. Online, you have only the text to convey your meaning. Offline, you have tonality and body language to change the meanings of those carefully chosen words.

By all means, continue using your social media tools in your networking. Be aware, though, that they are nowhere near the only, nor even the most powerful tools in your toolbox. Just as even the finest, most expensive hammer is largely useless when driving screws, so, too, the social media sites have their limited use in your overall networking strategy.

Keep that in mind the next time you have an invitation to coffee. It’s the face-to-face that will forge the strongest connections.